An Interview with Josh Reynolds

Josh Reynolds has spent the last decade doing apparently little else than writing stories across many genres and at varying lengths. We're thrilled that one of those stories, of the novella length category, is the third in Meteor House's line of Signed Limited Edition Novellas, PHILEAS FOGG AND THE WAR OF SHADOWS.

How did you get started as a freelance writer and what did you do before that?

I loaded mail trucks. Loading mail trucks doesn't pay as well as you'd think, and I needed money for rent, so I started exploring other avenues of remuneration. One of those avenues happened to be writing. I worked the graveyard shift at the loading dock, and I'm a perennial insomniac, so I had plenty of time to write.

Once I started to sell my writing on a regular basis, I bid adieu to the nightly conveyer belt dance-offs and cardboard box fights, though not without regrets.

According to your website, you've written 155 short stories, 5 novellas, and 13 novels since 2003 (that's quite a lot!), do you prefer to write shorter or longer works?

No preferences, really. Shorter works take less time, but I get paid more for longer stuff, so it evens out.

What is your favorite genre to write? How about to read?

My favorite genre to write is a sub-genre, actually. I love writing about occult detectives, be they backwoods ghost-breakers or mystical adventurers. The idea of a man or woman pitting themselves against the forces of darkness with only a bit of arcane knowledge and maybe some snarky banter on their side is one I can't help but enjoy.

As for reading, well, I tend to run hot and cold on most genres, except for mysteries. I enjoy all types of mysteries, from modern procedurals to cosy whodunits to the aristocratic amateur sleuths of yesteryear. Gimme a book by John Sandford, Carl Hiaasen, Sarah Paretsky or Ian Rankin and I'm a happy camper. 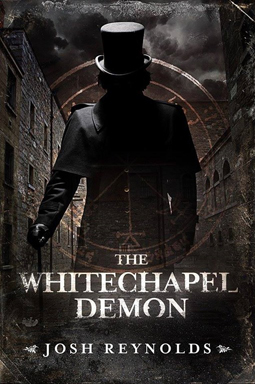 Well, you are perhaps best known for your series of stories about the Royal Occultist, Charles St. Cyprian, what can you tell us about him for those not familiar with him?

The Royal Occultist is the man - or woman - who stands between the British Empire and its occult enemies, be they foreign, domestic, human, demonic or some form of worm of unusual size. If there are satyrs running amok in Somerset or werewolves in Wolverhampton, the Royal Occultist will be there to see them off. The current Royal Occultist is Charles St. Cyprian, who's best described as Rudolph Valentino by way of Bertie Wooster. In the same vein, his assistant, Ebe Gallowglass, is Louise Brooks by way of Emma Peel. St. Cyprian is the brains and Gallowglass is the muscle; he likes to talk things out, and she likes to shoot things until they die. Together, they defend the British Empire against a variety of gribbly monsters, secret societies and eldritch occurrences.

They made their first appearance in 2010 in the short story, "Krampusnacht" and have since appeared in close to thirty short stories, in a variety of anthologies and magazines. The first novel, THE WHITECHAPEL DEMON, was released in 2013 by Emby Press and is available via Amazon.com and Smashwords. The Whitechapel Demon sees St. Cyprian and Gallowglass go up against a secret society of murderists and an other-dimensional doppelgänger of one of history's most notorious killers. The book serves as an introduction to the world of the Royal Occultist as well as delivering an exciting adventure for new readers and old fans alike to enjoy.

By which I mean, you should go buy it, please.

Have you written about any other occult detectives?

Oh loads. There's John Bass, my aforementioned backwoods ghost-breaker, who's appeared in eight or nine stories now. I've written a few stories featuring Harley Warren and Randolph Carter (from Lovecraft's "The Statement of Randolph Carter" et al) as occult investigators in a distinctly Lovecraftian universe. I've also written a short story, "The Gotterdammerung Gavotte", that features not one, not two, but SIX occult detectives, including Charles St. Cyprian. That one's available to read for free, by the by, over at the Lovecraft eZine.

Who do you consider your biggest writing influences?

I've written elsewhere how Farmer has turned me on to many different authors - including several you mentioned: Carl Hiaasen, P.G. Wodehouse, Arthur Conan Doyle, as well as Mark Twain, Edgar Rice Burroughs, Rex Stout, E.W. Hornung and many others - did he ever have that affect on you?

I discovered Lester Dent through Farmer. I read DOC SAVAGE: HIS APOCALYPTIC LIFE before I read any of the actual, y'know, Doc Savage books which seems like a bass-ackwards way of doing it, I know, but I was a kid and the Farmer book was easier to get hold of. Conversely, I discovered a new appreciation for Tarzan after reading TARZAN ALIVE.

The latter is one of the reasons I still re-read Farmer to this day - he's so damn exuberant about all of these authors that you can't help but feel your enthusiasm for the originals rekindled when you read something of his that references them.

When did you first discover Philip Jose Farmer, what was the first work of his you read?

I discovered Farmer in high school, as many folks do - in my case, it was a collection of Lovecraftian fiction which included Farmer's story, "The Freshman." From there, I chanced upon a battered copy of Farmer's translation/expansion of JH Rosny's IRONCASTLE and THE OTHER LOG OF PHILEAS FOGG, and that pretty much sold me on him.

What is your favorite Farmer?

Tough one...I'm tempted to say THE ADVENTURES OF THE PEERLESS PEER, because I'm a fairly unrepentant mark for anything Sherlock Holmes related, and the idea of Holmes and Tarzan having an adventure together was a formative one for me, when I first read the book. But, then there was also TWO HAWKS FROM EARTH, and the aforementioned IRONCASTLE.

I think I'm going to go with TWO HAWKS... I enjoy that book as much now as I did when I first read it. 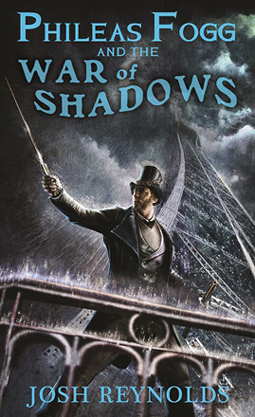 With most of Farmer's oeuvre to choose from what drew you to his take on Phileas Fogg for your novella?

Honestly? It was the one I thought people would buy, you know? I'm a fairly pragmatic guy. My first inclination was to make a play for a TWO HAWKS sequel, because I love that book to pieces, but the more I thought about it, the more I thought it might be smarter to go for a more recognizable (and recently reprinted) piece of the oeuvre.

Plus, you know...Phileas Fogg. Dude's pretty cool, right? Who wouldn't want to write about him?

Have you done any other writing set in that time period, or does it have a special appeal to you?

Some - I've written a number of steampunk-y short stories, which are invariably set in a pseudo-Victorian/Edwardian period (albeit of the alternate history variety), as well as a few Sherlock Holmes stories. I'm a history buff, and this period in history is one that I find particularly interesting. There was a lot going on in the world, and a lot of interesting characters (both real and fictional) wandering about, cluttering up the landscape.

How much research did you have to do for this particular story?

A fair bit - figuring out how long a train journey from Calais to Paris might have taken back then occupied the better part of a day until I remembered that it didn't actually matter. Luckily, I had most of the research materials to hand already - I'd been wanting to use the Exposition Universelle as a backdrop for a story for some time, for instance.

You snuck a few crossovers into the story, is that something you do in your other stories?

All the time. I'm not being facetious. Literally, all the time. It's one of the ways I keep myself amused while I write. Crossovers are the secret caramel core of the Twix bar that is writing.

So perhaps in a future story one of your characters will be knocked down by some men chasing each other through the Exposition Universelle....

It is almost a certainty that such will occur at a future date. The Exposition was a big deal, lot of people there. Probably at least four novellas going on at the same time. One of ëem probably involves a robot.

Scratch that. It does involve a robot and it is swell.

Other than Phileas Fogg and the War of Shadows, what you would recommend to someone who wants to sample your work?

Well, there happens to be a whole collection of Royal Occultist stories available as a free PDF download, with a swinging cover by MD Jackson, if you're interested.

Yes, we are - and hopefully a lot of Farmer's fans will be as well!