Below are three wonderful illustrations done by Keith Howell (he contributed the first piece of fan art to this website) for PEARLS FROM PEORIA. The originals of all three of these sold $125 each. They were done on 11" x 17" heavy bristol stock in full graphite.

Click on any pic to view a larger version. 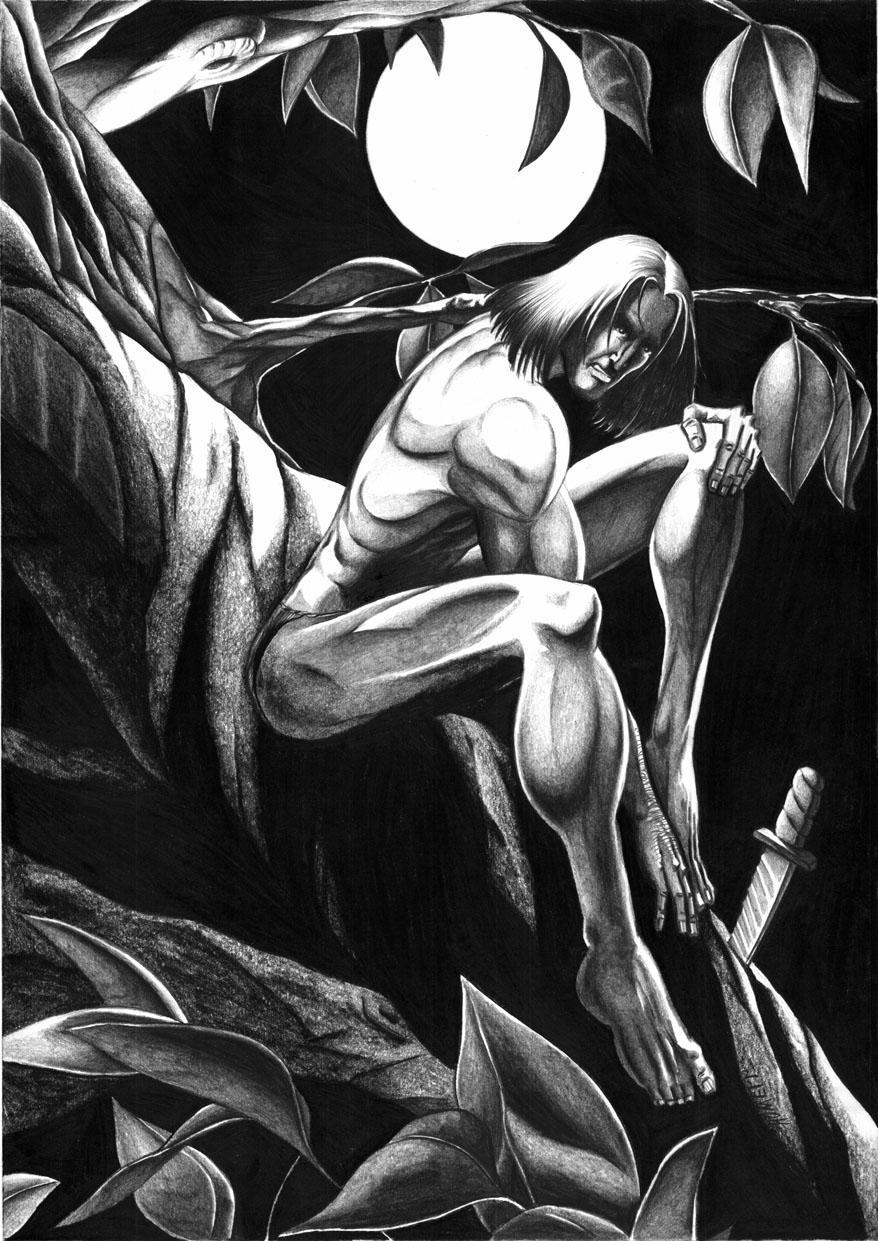 In this portrait, I used the bright full moon as the light source for the image. Since Lord Grandrith is "Lord of the Trees," I felt it imperative to place him in a tree. I sketched around with ideas such as letting loose his guttural yell or swinging from tree to tree. I settled on this image of the noble savage reclining in the tops of the trees late in the evening.

Grandrith is tired from his long day on the move and, even though resting, he is still alert in the darkness for any danger. His knife is poised in a place where he can grab it in an instant. Note that his hair is unstyled, but essentially just one length -- about to his shoulders. This is because when it grows below his shoulders, where it could become a detriment to him in a fight, he just pulls it around and uses his deadly sharp knife to slice the extra length off. He prefers to be nude, but I have him wearing just the barest hint of a loincloth -- just enough to give his groin area protection from elements and a waist band where he can slip his knife when he needs both hands free.

While the portrait is realistic, it is also stylized. The musculature of Lord Grandrith draws inspiration from the Tarzan comic strip art of Burne Hogarth. One of Hogarth's drawings was used for one of the paperback covers of Phil's TARZAN ALIVE! Hogarth has his artistic critics because he frequently and freely ignored even the illusion of realistic anatomy when it served his dramatic purpose. Even so, I appreciate his work and the dynamic movement he evoked in flat drawings on newsprint.

In my drawing, I am attempting to give the viewer the feeling of movement even as Grandrith is sitting still. For the tree, I have taken the same stylistic musculature I used on Grandrith's body and mirrored it in the growth of the tree. Not only does this help make the illustration more interesting and textured, it further drives home the spiritual and physical connection between Grandrith and the trees of his jungle home. 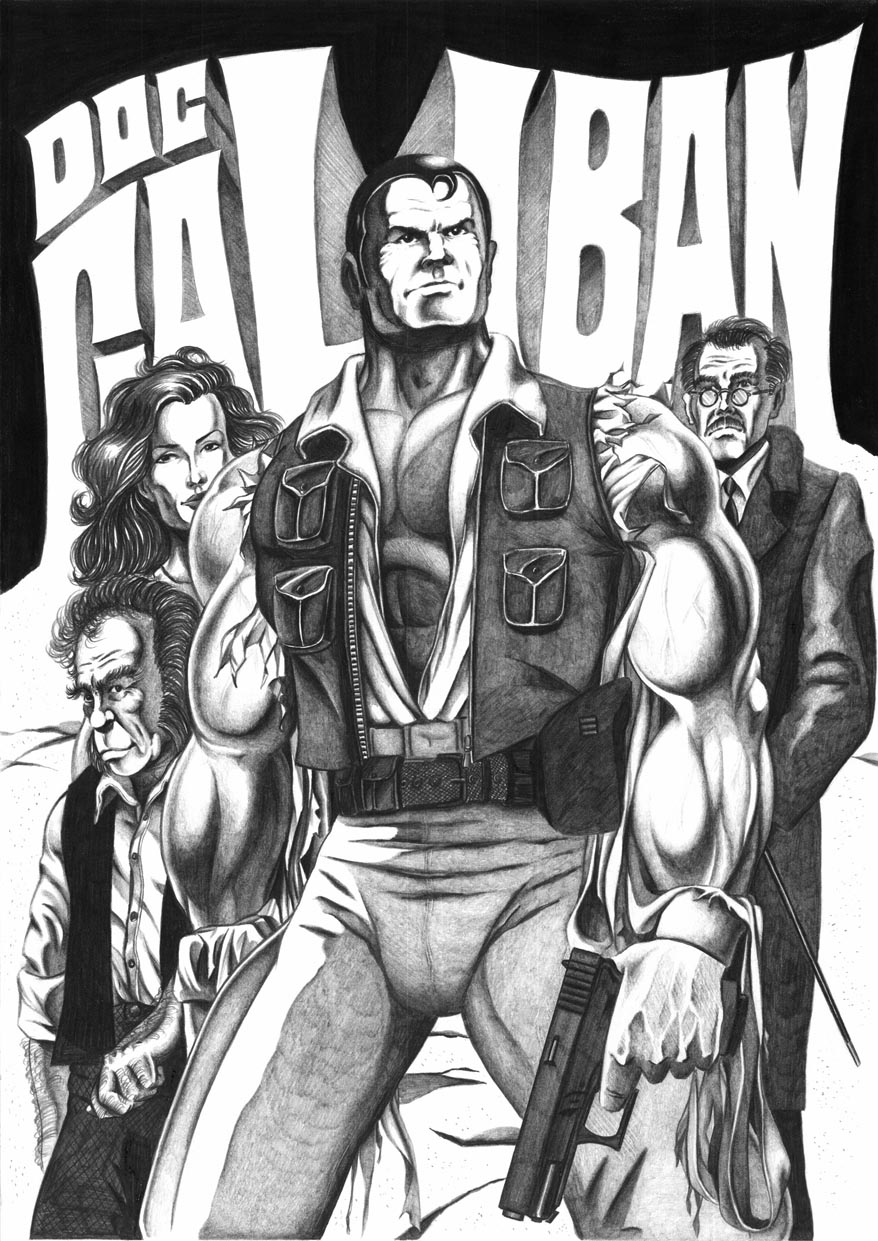 A standard pose of Doc, Pauncho, Barney, and Trish. To further drive home the Doc Caliban/Doc Savage pastiche, I even took the familiar Doc Savage logo and converted it to "Doc Caliban" and carved it into stone for the background. For Pauncho and Barney, I wanted to evoke Monk and Ham, but make them seem more "real" physically. I also aged them a bit, which gave them both more character as drawings. Trish was simply based on a tall model that I once saw and noted her cheek structure and eyes. I felt she exemplified Phil's descriptions of Trish.

Doc was a fun project in and of himself. I know that Phil has expressed trepidations toward the James Bama design for Doc Savage that includes the extreme widow's peak hair style. However, I remember reading an old Doc Savage adventure many years ago (perhaps THE BLACK SPOT?) where Doc's hair was described as looking like a skull-cap "helmet" and having qualities that caused water to bead up and drip off. This stuck with me and I've always assumed this was what inspired Bama's design. That being said, I've also had a personal preference for the more natural Baumhoffer design with that thick curl of hair. So, what you will see in my portrait is an attempt to combine the two. I have included the extreme widow's peak and skull-cap style, but I have made sure that the hair coloring is darker -- evoking the dark bronze of Phil's description. At the same time, I have included one large stray curl down over Doc's forehead that lets the viewer know that it is hair and not a metal helmet -- even though its unique qualities may give that illusion at first glance.

Just because I love the Bama-style choice of always portraying Savage with that torn shirt, I have done so as well for Caliban. It makes for artistic opportunities for folds and tears which lend texture and interest to the picture. As well, it makes it seem that Doc has just finished battling some great evil-doer.

In Doc's hand, right near his impressive...ahem...is a Glock .44 handgun. Doc's musculature is not wildly exaggerated, but I did do SOME exaggeration. The reason for stylizing his musculature was to better capture the imagery of his muscles as "coiled pythons." I wanted this to be my definitive Doc Caliban portrait. As such, I used no reference for his face. I wanted a unique face for Doc that was youthful and strong, but world-weary as well. 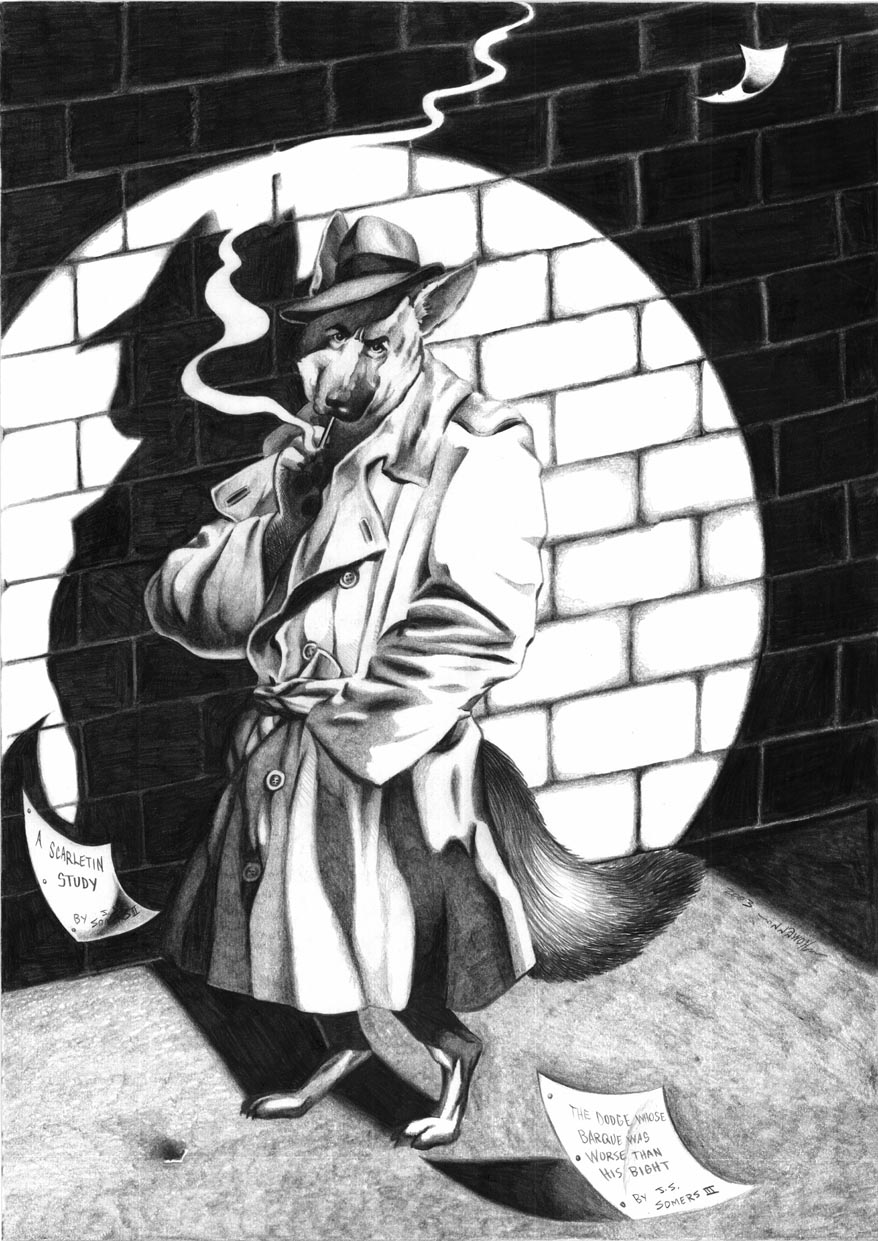 My inspiration for the portrait was an old Sam Spade publicity shot of Humphrey Bogart. I even scrounged up a couple of good black and white photos of Bogie's face that I used as reference for Ralph's face. Working from a couple of German Shepherd photos, I tried to keep Ralph looking like a dog with HINTS of Bogie in his face. If you look carefully at Ralph's eyes, you'll see that they aren't dog eyes but Bogie's eyes. I think that odd conflation of features makes Ralph very appealing as a portrait and illustration.

Even though I'm working in grey tones, I like the stark contrast between light and dark, so you will find I incorporate pure white and black as well. Ralph is essentially a 40s era Hollywood private dick who just HAPPENS to be a dog and this noir-ish portrait captures the playful, yet dramatic, tone of the Ralph Von Wau Wau stories.