An Interview with S.M. Stirling

S.M Stirling is a prolific author mainly of series novels such as his: Lords of Creation, Nantucket, Emberverse, Shadowspawn, Fifth Millennium, Draka, General, and Falkenberg's Legion series, as well series by or with other authors such as the: Flight Engineer, Man-Kzin Wars, Terminator 2, CoDominium, Ship Who Sang, Honorverse and Riftwar series. 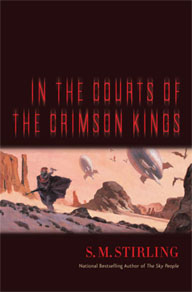 You included Phil Farmer in your acknowledgements to IN THE COURTS OF THE CRIMSON KINGS, the second book in your Lords of Creation series, which is helping to carry out a modernized SF pulp revival. What was it about Farmer's works that helped lead to the series?

Partly their own merits, and partly the example that the headlong zest of the pulps could be combined with first-rate writing and careful construction.

What do you think it is about pulp SF that gives rise to this headlong zest?

Lack of self-consciousness and enthusiasm. If you look at Howard's writing, for example, you feel that while he was writing it he believed it.

Some people claim that a lot of modern SF lacks a sense of adventure. Whether or not you share this view, do you think that the element of adventure inherent in pulp could help the genre overall by modernizing pulp—or perhaps by bringing more of this and its other best qualities into modern so-called mainstream SF? (Or both?)

Does anyone ever ask you, “But…why pulp?” Have you ever found yourself in a position of defending it?

Frequently. Basically trying to "rank" genres is a form of snobbery. They operate according to rather different reading protocols and that's about all you can say. 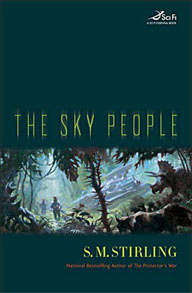 Your voice and style in the Lords of Creation books were noticeably different from your other novels. Was this intentional or, as some authors have put it, did the books tell you what their voice would be?

It sort of seemed appropriate; the process isn't entirely conscious.

Will we be seeing another Lords of Creation novel soon?

Not soon. I took a bit of a hit to write those as a labor of love. The sales were good, but not enough to encourage the publisher to be forthcoming.

Something you share with Phil Farmer is a thorough dealing with religion in your work—not simply as a trapping but an inextricable part of the story with often profound consequences for characters and plot. Do you see SF getting better—or worse, or neither—at realistically weaving religion into its stories?

Not really getting better. It's a subset of the general "alien" problem in SF and fantasy; as the saying goes, most SF aliens are less alien than a Japanese. Most fantasy writers aren't religious and have problems getting inside the heads of people who are; but for most of the human race through most of its history, religion was utterly pervasive. Phil dealt with this well, simply because he was a good writer.

What is your greatest challenge in writing history? Religion?

Not religion as such; the fact that people in the far past (or in some ways in the fairly recent past) are so different. Maintaining reader identification can be hard.

Any advice to writers wanting to tackle modern pulp?

Enjoy what you write. It's got to be something you'd enjoy reading. 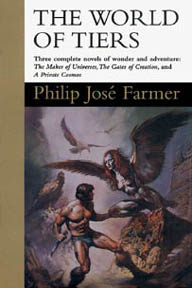 Oh, that's a toughie. I'd have to say the World of Tiers. It's the sheer amplitude of it.

I understand you're writing a story for THE WORLDS OF PHILIP JOSÉ FARMER series, can you tell us anything about that?

My working title is "Trickster of the Apes," and it's set in the World of Tiers; it's a riff on a throwaway line (Farmer was—brilliant—at those) in THE MAKER OF UNIVERSES.

How do you think Phil Farmer will be remembered by readers in the years to come?

Rather like Edgar Rice Burroughs, only with a much broader range and technically a better writer, I'd say. It would be a tossup on their scope of imagination, though Phil had the advantage of writing later and 'standing on the shoulders of giants'.

I'm very sorry he didn't get to see the "John Carter" movie and write a story for the Burroughs Barsoom tribute anthology that's coming out next year. (I did one.) His would have been awesome.