This series is an offshoot of the Fictional Author series that took on a life of its own when Ralph walked into Callahan's Place. 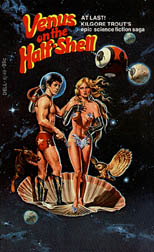 VENUS ON THE HALF-SHELL

In many of Kurt Vonnegut Jr's books someone will mention a story written by sad sack science fiction author Kilgore Trout. Inspired to write VENUS ON THE HALF-SHELL 'by' Kilgore Trout, Phil did the same thing and had the main character talk about his favorite science fiction author, Jonathon Swift Somers III. Somers is mentioned several times throughout the book and each time one of his stories or characters is described. It is on page 110 that we first learn of Ralph von Wau Wau and novels such as A FAT, WORSE THAN DEATH, NO NOSE MEANS BAD NEWS, WHAT AM I DOING ON YOUR TABLE?, and A FAT IN THE FIRE. 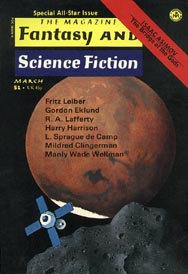 The second story in the Fictional Author series. Jonathan Swift Somers III is the favorite author of Simon Wagstaff (the main character from VENUS ON THE HALF-SHELL). Ok, so we have here a story by a fictional author from a story by another fictional author. The best part is that the story is about a German Shepard with a 200 IQ and deductive abilities rivaled only by Sherlock Holmes himself. The story begins similarly to A Study In Scarlet where the great detective meets his side-kick and chronicler. Full of puns, in both German and English, this story showed great promise as the beginning of an interesting detective series. 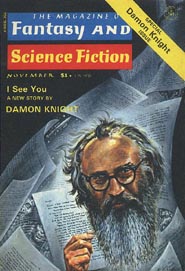 The Doge Whose Barque Was Worse Than His Bight

The second story about Ralph von Wau Wau the German Shepard with the 200 IQ. In this story Ralph meets his new side-kick, Cordwainer Bird and tackles his toughest adversary to date, another genetically enhanced animal. 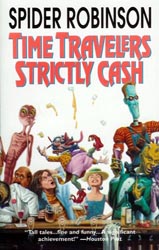 Ralph Von Wau Wau first entered Callahan's Place in TIME TRAVELERS STRICTLY CASH, the second volume in the series. Ralph has fallen on hard times until he and his newest sidekick walk into Callahan's, a place where "shared pain is lessened and shared joy is increased". What starts off as the old bar bet "I'll bet you my dog can talk" gets turned on its head. Spider Robinson himself tells us that Ralph has appeared in every Callahan book since TIME TRAVELERS STRICTLY CASH. 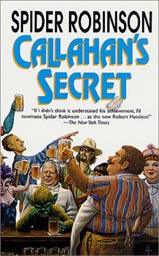 None of the four stories in CALLAHAN'S SECRET revolve around Ralph but he is now a regular and appears in two of the stories:

The Blacksmith's Tale - It is Tall Tales night and Ralph tells a story that ends with "Possession is nine tenths of the paw." You see, even when it isn't Punday, most of the Tall Tales also end in puns. On Punday they just come faster.

The Mick of Time - In this story a telepathic call is sent out to all of Callahan's regulars to come at once. While we normally think of Ralph as spending his time hanging out with humans, he does spend some quality time with female dogs. Callahan's summons comes at the most inopportune time. 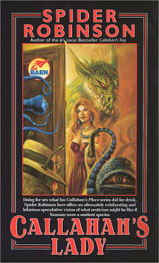 The setting has shifted from Callahan's Place to Lady Sally's House and while many of Callahan's regulars make appearances, a new set of regulars are the focus of these stories. However, Ralph von Wau Wau can be found pretty regularly hanging out in the parlor:

In chapter 3 the second time Maureen goes into the parlor of Lady's Sally's she is introduced to "the celebrated author, Ralph von Wau Wau". She is pleased to meet him, and scratches him behind the ears, even though he does throw a pun at her. A few pages later Ralph tries to distract a gun toting intruder but the guy is so high he just takes a talking dog in stride. At the beginning of chapter 7 Ralph is mentioned but it is better not to say what is going on here (mostly so I don't give too much away). 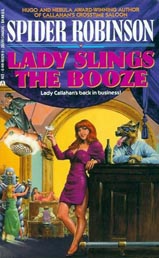 Joe first meets Ralph von Wau Wau in chapter 4. They meet at the base of the spiral staircase and while Joe is offended by the puns Ralph spews forth he decides that anyone who says "excuse me" is human. His attitude about Ralph goes a long way to securing his job. Later when Joe and Sally assemble a team to save the world from (I guess I shouldn't tell you that) Ralph is selected to be on the team and plays an important role in catching the bad guy. 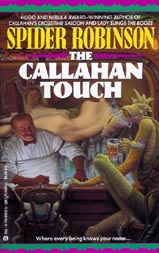 In this, the sixth book in the Callahan series, the action has switched from Lady Sally's to Mary's Place, which is a lot like Callahan's place. Jake Stonebender is once again the narrator, and now he is also the proprietor. When the doors of Mary's Place open for the first time only the regulars from Callahan's are invited, and Ralph von Wau Wau is among the crowd. The action takes place over a very short period of time and Ralph is mentioned among the patrons several times.

OFF THE WALL AT CALLAHAN'S

This book is a collection of things written on the wall behind the bar and overheard at Callahan's. Wisdom, jokes, song lyrics and yes, even puns, can be found in this book. There is rather long, and rather awful, pun by none other than Ralph von Wau Wau in the book.

In the seventh book in the Callahan series the action is still taking place at Mary's Place. Ralph von Wau Wau is mentioned at least seven times through out the book as he is present throughout pretty much the whole story. My favorite mention of Ralph this time is the very first one where it says; "...Ralph von Wau Wau the talking dog got out his latest short story and started reading to us...". I just love reading about authors for some reason. 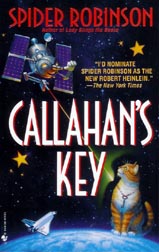 In the eight book in the Callahan series Jake and company leave Long Island and head south to the Florida Keys, a place where such a group of odd balls can almost fit in. Ralph is mentioned in this book more than the previous books, but many of the mentions are in passing as Ralph becomes more of a fixture. For example "Erin and Ralph von Wau Wau were dancing together in the middle of the room, a site that would make a cat laugh." You are more aware of his presense throughout the book. 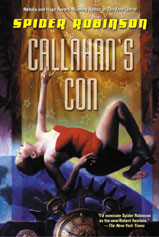 The ninth book in the Callahan series is very similar to the eight as far a Ralph is concerned. He is almost always around but doesn't play a very big role or have many scenes. Although in this book he does have a funny scene with a talking Key deer. We are eagerly waiting to be able to add details about the next book in the Callahan Series.